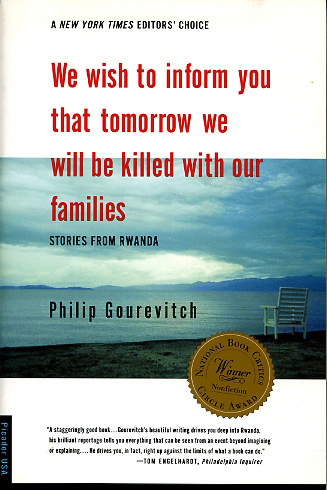 The quote on the cover is apt: “a staggeringly good book.” This is a cutting political dissection of Rwanda from before it was even conceived of to modern times, with the horrific genocide of 1994 the unfortunate climax in this story.  The salient point is that Rwanda and by extension Africa isn’t a hapless mess, but a complex web of competing interests. In the case of Rwanda the country didn’t succumb to barbarism, there is a clear party at fault which is the Hutu supremacists, the perpetrators of the genocide.

There’s a tendency to write off the continent altogether since it seems blighted by war, poverty, dictators and dysfunction. There’s truth in that, but the reality is that the people aren’t amoral savages destined to Hobbesian brutality; they just happen to live in places with a web of competing and conflicting groups and interests, not unlike a Europe of  500 years ago (or even 25 years ago in Yugoslavia). Even an insane situation like genocide can’t be attributed strictly to homicidal barbarism. There is a logic to it and a brutal pursuit of self-interest at play.  Rwanda is decipherable if you pay close attention and anything decipherable is also workable, which is the good news.

The unfortunate truth is that no country and even no individual person can rely on others to save them when in need. To quote The Streets:

“No-one’s really there fighting for you in the last garrison. No-one except yourself that is, no-one except you.  You are the one who’s got your back ’til the last deed’s done.”

When staggering evil is unleashed and you assume that surely someone will realize this and do something, that something might not happen. In the case of Rwanda there was an assumption, or at least a hope, that individual Hutu’s might restrain themselves from killing, that other African nations, the United Nations or the USA would intervene.

Unfortunately it was not in the interest of anyone to risk anything to prevent the Tutsi from being slaughtered, aside from themselves. Individual Hutu found it safer to follow orders, even when it meant hacking your in-laws to death with a machete. The United Nations did not have members willing to fight for the Tutsi, nor did the USA, which was still reeling from the killing of 18 marines in Somalia. The French even sent in troops to aid the butchers as it was somehow calculated that it was in their self-interest. The only salvation for Tutsi’s were other Tutsi’s, as those exiled in Uganda were able to mount a successful invasion of Rwanda and come to their rescue.

The conundrum for Rwandans today is that they must cooperate and identify first as Rwandans, not Hutu or Tutsi, if the country is to function and anyone is to prosper.  This requires an enormous level of trust, especially when you know the other side has the potential to obliterate you and has tried to recently. If you can’t trust anyone else, how do you then build trust? The good news for Rwandans in all of this is that they at least know they can’t count on the USA, the United Nations or anyone else for guidance or salvation. If they want the country to work and to prosper, only they can truly figure it out.

Currently the country is a dictatorship run mostly by Tutsi’s, who form only about 15% of the population. The human rights record is poor, as opposition and free speech are not tolerated. However, the life expectancy rate has doubled, the economy is doing well and child deaths are much lower. It isn’t an ideal situation as people should be able to speak freely or run for office.

At the same time it’s a logical arrangement as it’d be asking a lot of Tutsi’s to cede power to Hutu’s, akin to Jews handing the reins to Germans in 1955, as would be the case if a free election were held. The objective is to create and instill a Rwandan national identity that supersedes an ethnic identity. When this project is complete and a level of trust is established, there’d be minimized risk that more freedom would lead to violence. In the meantime a Tutsi government ensures the Hutu, if tempted, can’t repeat their mistakes of the recent past.  As with Europe post-WWII the solution to unbearable violence is to expand the concept of who “us” is and hopefully there will be a realization that violence is in nobody’s interest. It isn’t perfect, but Rome wasn’t built in a day and it seems like a Rwandan solution from those who know best the realities of their own country.

I can’t rate this book highly enough if this is a subject that remotely interests you.

Gwynne Dyer is a Middle-East expert and long standing owner of the most ghoulish head shot in print media. Seriously, they can’t find a better picture? Guess not. Makes Rex Murphy look handsome.

Like practically everyone I’m a bit Jihaded out. It’s like reading a comic and no longer caring that Nick Fury is about to go back in time to kill Hitler. The invisible woman and the guy with super long arms, you had me, but this is too much! Osama Bin Ladin wanting the United States out of Saudi Arabia, fair enough, but the messiah riding in on a white horse to drive back the anti-christ, after defeating the Roman Empire? Really?

Or, as a dude (it has to be a dude) that maintains creepybasement.com wrote about serial killer BTK wearing his victims underwear: “Normally, I try not to pass judgment on the people I write about, even killers. However, this is just too disgusting…I don’t understand it, and I hope I never do.”  Whatever the reason for shooting teens at an Ariana Grande concert, I take the CreepyBasement.com approach that sometimes something is so odious that you know it’s sick and the particulars of why are irrelevant.

If I have to keep up on something so odious, I’d rather read a detached and contextualized account, as Dyer presents here. It isn’t sensational like your average CNN ISIS update on some poor hostage getting his head cut off or threat #1592 to slaughter the infidel.

Gwynne Dyer senses that there is a need for some perspective rather than daily insanity and Don’t Panic, a short history that traces the origins of ISIS from the Iraq War (II) up until 2015, provides this.  The central thesis is that the Islamists require a foreign intervention or hatred of Westerners to inspire Muslims to take up their cause. Whether it’s Russia in Afghanistan, the U.S. in Iraq or Jews in Israel, he argues convincingly that the Jihadists want and need infidels to meddle so they can rally the population to their side.

I think there’s obvious truth in this argument and it is important not to take the Jihadist bait at every cast. Still, even if the West basically ignored them and stayed out of the Middle-East, the Jihadists will always manufacture some sort of grievance, legitimate or not, and attempt to kill and antagonize. After the first Iraqi war the Americans did not occupy Iraq for Dyer’s stated reasons and they defended Muslims in the Balkans. In return they got 9/11. So the question is how to slow down the Islamists without also inspiring more people to join their cause? The best argument I’ve seen is to allow secular thugs like Sadaam or Assad to suppress them. Not an admirable position, but as Obama learned in Syria, there’s no third option available. Maybe provide an air strike if things get real bad, but that’s about it.

Personally I think the battleground is one of ideas and I think the West has done a horrible job articulating the merits of liberalism. Liberalism is not about iphones and strippers, it is about freedom.  George Bush II attempted to make this argument and I think he was sincere, but the freedom he preached was hard to square with a massive invasion. Likewise Steve Bannon sees a war between Christianity and Islam, but there is nothing underpinning his side of the war, since the majority of the West is no longer even Christian. Trump himself isn’t Christian and he is a manifestation of everything rotten that liberalism allows: materialism, ego-centrism and vacancy of mind and purpose.  Suicidal post-modernism is also not useful as shooting teens at a pop concert or removing girls genitals isn’t alright and believing it is amounts to suicide.

This is where I think Dyer goes astray. His argument is that the Middle-East is a tiny portion of the Earth and insignificant to the West. We should just ignore it like you’d ignore a bee and it won’t bother you. Even if you get stung, best just to move on. Terror attacks aren’t car crashes or bee stings though, they are political acts.

If it is a war of ideas you need to offer up a strong counter-point and some of the ideas, for example, held by British Muslims, population 2.7 million, are horrific.  Terror attacks stemming from such ideas aren’t meaningless like a car crash, they are the outward manifestation of political beliefs. If these ideas gain sway there will be sectarian violence, as we see in the Middle-East and now frequently in France and Britain.  To call out these ideas, as citizens do, is derided as racist, but I’ve yet to see a Western politician articulate their side of the argument with conviction. Dyer doesn’t seem to see this as necessary either.  It shouldn’t then be shocking that, when this responsibility is abdicated, the worst manifestation of liberalism, who happens to be speaking truthfully on this issue, is elected.